KATY, TEXAS (June 7 2022) – Four Katy students were among the 19 national recipients of academic scholarships from Havenpark Communities, an operator and developer of manufactured home communities in Katy and across the country. The awards are part of Havenpark’s expansion of its Education Success program, which offers financial support, mentoring, and other education initiatives to increase education access and opportunity for residents.

Havenpark announced the scholarship recipients in April, where winners were awarded up to $10,000 annually to cover post-secondary expenses for colleges, universities, trade, and vocational schools. In its second year, the initiative has grown exponentially from its pilot in 2021, which awarded two scholarships to residents in Indiana and Ohio. Havenpark’s program pledges at least $500,000 annually to support education initiatives.

Scholarship recipients participate in Havenpark’s mentoring program, which provides students – many of whom are first-generation college students—with encouragement, support, and resources to succeed in their journey to certificate or degree attainment.

“These students have the most inspirational stories, and I am excited to see where their future takes them,” said Jason Hale, director of Havenpark’s Education Success Program. “Awarding them a scholarship is great, but our goal is getting them all the way to the finish line and where they want to be.”

Evelyn Guerrero Sanchez, who just completed her first year at the University of Texas at Austin, said that personal motivation fueled her to apply for this scholarship. In her first year, Guerrero Sanchez successfully navigated university life and took advantage of everything the college experience has to offer, including active participation in several school and community organizations. She is currently involved at the local church and the Hispanic Business Student Association.

“I just want to make a better life for myself, and give my parents a better life,” said Guerrero Sanchez, who was on her high school cross country and track teams, and was also involved in National Honor Society, National Math Honor Society, and the student council. “I really think that sports helped me develop my character. Especially with cross country with endurance – being able to endure everything that was going on and the struggles with college applications.”

Daysi Mandujano, who also just completed her first year at the University of Texas at Austin, is participating in the school’s pre-med program. She says that her mother pushed her to continue her education and her parents were thrilled when they learned that she had earned Havenpark’s renewable scholarship.

“Ever since I was little my parents always told me to go to school and be somebody in life,” said Mandujano. “That was my biggest motivation and they have always been very supportive. They always said, ‘If we have the money, we will help you out and do everything’. It’s not just my parents, but also my grandparents will try to do everything for the kids.”

Though her first semester was difficult as COVID resulted in online courses and canceled athletics, she navigated successfully with the help of school mentorship programs. Going forward, Havenpark’s scholarship will help her with the high cost of room and board.

“What I mostly worried about was housing – that’s really expensive,” said Gallegos. “I would feel bad because I chose to come all the way out here (out-of-state). I know with this scholarship, it definitely helped me cover a lot of my housing payments for the next year.”

Israel Gallegos, Andrea’s younger brother, is also a scholarship recipient who plans to attend Sam Houston State University in the fall and major in political science. He says that his sister provided guidance as he looked to continue with his education. While counselors could be busy, she made time to push him toward college. At first, he was discouraged and didn’t know if he’d become a recipient.

“God really helped us,” he said. “If I didn’t win it, I would probably go to community college because [universities] are expensive. With the money from the scholarship, I have a leg-up from what I thought I would have,” said Gallegos.

Each Havenpark scholarship recipient will receive up to $10,000 per year which may be renewed for three additional years or until a bachelor’s degree is earned. A little more than two-thirds of this year’s recipients plan to attend a four-year college or university, and about one-third plan to attend a two-year or vocational-technical school.

The 2022 competitive scholarship application period ran from December 15, 2021, to January 31, 2022, with about half of the applicants rewarded with scholarships. To be eligible for consideration, applicants needed to have a minimum cumulative grade point average of 2.5 or above, be either a current resident of a Havenpark community or have a parent/guardian who is a resident and must plan to enroll or continue enrollment in full-time or part-time undergraduate study at an accredited two-year or four-year college, university, or vocational-technical school in the United States for the entire 2022-2023 academic year. Awards may transfer from a two-year institution to a four-year intuition and vice versa. 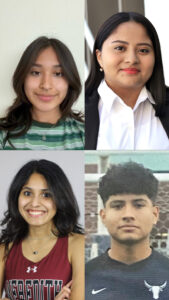